Posted by The Haberdasher ⋅ April 13, 2016 ⋅ Leave a comment
Filed Under  Jeremy Gerrard, Music, song-writing, The Amblers, The Rugs, WordSpring 2016

Once again, The Haberdasher is pleased to present a series of interviews with presenters from this year’s WordSpring Creative Writing Conference. We will feature conversations on craft, process, inspiration, form, and publishing right up to the conference, April 23rd. 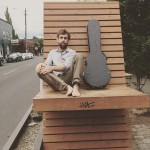 What better way to prepare for this year’s Wordspring than by getting to know the presenters? I recently had the pleasure of interviewing Jeremy Gerrard about his challenges, accomplishments, and writing inspirations. Gerrard, who will be offering a workshop in “Effective Songwriting,” comes from a musical background and has pursued music for nearly 20 years. He’s now playing with his current all original band, “The Rugs.” In addition to being a musician, Gerrard is also passionate about writing and is an English teacher.
Mercy Yepez (MY): Was there a moment when you knew you wanted to (or had to) write?, If so, what was that moment?
Jeremy Gerrard (JG): Well, moments that catalyze writing occur at overwhelming rates–everything from massive heartbreak to a fly not finding its way out of a room.  The trick is to catch as many as possible.  But the other trick, whether it’s ones that were never caught or ones that were caught but proved too wily in the net for too long, is to have the guts to contentedly let them go.  Who knows; you’ll probably see ’em again in some form anyway.
MY:What qualities do English and music share that inspired you to pursue both?
JG: English and music (lyrics especially) share many important qualities; unfortunately, however, this crossover is often stifled. That is to say, songwriters and English teachers alike would do themselves well to adopt more of each other’s skill set.  For instance, the approach to understanding audience and purpose in writing can be more effectively understood in both camps by understanding how it works well in the other.  Writing assignments could and should involve more creative tasks that don’t compromise the lesson; similarly, songwriters ought to consider vocabulary, sequencing,  and grammatical parallelism, especially when confronted with writer’s block.
MY: What has been your biggest challenge in pursuing this path?
JG: I think the biggest challenge is finding time to polish creative projects. Polishing meaningfully requires a good amount of time and energy.  Sadly, because of this, tons of great work sits neglected and eventually forgotten. Regarding my upcoming workshop though, and all of WordSpring really, we’re hoping to get not just those creative writing projects off the shelves, but the creative writers themselves–perhaps it’s no accident that “shelves” and “selves” so closely resemble each other here  :).
MY: What has been your greatest accomplishment? What are you most proud of?
JG: Regarding songwriting, I think the album I’m most proud of so far has been “Pattern Parts” by a band I was in called “The Amblers.” I didn’t write all those songs, as I do for The Rugs, but I had a hand in most of them, and it’s a record that is still in people’s playlist circulation, and despite listening to it a thousand times during production, it’s in mine too.
MY:Could you describe what the writing process of a band is like and how it represents all of your styles?
JG: The Rugs writing process is a little different. It’s more of an approve-to-polish approach. I bring sketches–some more complete than others–and the structure generally stays the same, but the layers brought by everyone in the band make the songs a little bit of everyone.  The beats, harmonies, and textures are products of the others’ styles, and I’m very thankful for that.
MY: What is your favorite part about touring?
JG: There are few things more liberating and comforting for the soul.  Traveling and playing songs that we’ve created allows us to put something into others’ worlds that wasn’t there before, and we get to put something into our world that wasn’t there before.  Considering the art, the hospitality and support, the camaraderie, the simplicity, and the freedom that all paint the touring picture, I think it’s humanity at its best.
MY: Where do you think publishing and the music industry are going next?
JG: Well, there will always be a spectrum of preferences.  It’s certainly getting easier and easier to create and distribute music, but this causes some scenes and genres to become a little over-saturated, but that in turn creates higher stakes for attention.  As always, there will continue to be trends of throwback styles, and as always, there will be artists who bend and break the thresholds of appeal.
MY: Are you working on anything now? What are you planning to tackle next?
JG: Actually, The Rugs just finished most of the tracking for our second album. We’ve got 12 songs that will hopefully be all ready to roll by early summer. I’m always writing though. I guess my next big project will be to combine or develop all the projects on my shelf before the brackets break.
MY: What are some of the things participants can look forward to going in to your workshop?
JG: Participants can look forward to discussing their songwriting within a local network of songwriters of all types. This network is diverse, and it’s that kind of diversity that translates well to songwriting itself.  The best songs are ones that depict a network of senses, so we’ll try to bring cohesion to those senses while concurrently expanding the frontiers of those senses. Word-play can very effectively help here, so we’ll spend some time talking about that.

Gerrard’s workshop “Effective Songwriting” workshop is one of seventeen workshops in poetry, fiction, creative nonfiction, song-writing, and more that will take place Saturday, April 23rd as part of WordSpring 2016. Conference registration is open now, and spots are filling up fast, so check out buttewordspring.org for more information.

Once you’ve registered, come back to The Haberdasher and let our presenter interviews help you decide which workshop line up is for you. Or, just drop in to hear writers talk writing. Next up, award-wining novelist Chitra Banerjee Divakaruni.

Created by writers for writers, The Haberdasher, or le Hab, is your Peddler of Literary Art for Northern California and beyond. In addition to writing tips and literary debates, we also feature critical reviews and author interviews.
View all posts by The Haberdasher »
« “The Story Won’t Tell Itself”: An Interview with Tim Hayes
“Immigration Made Me Into A Writer”: Interview with Chitra Banerjee Divakaruni »